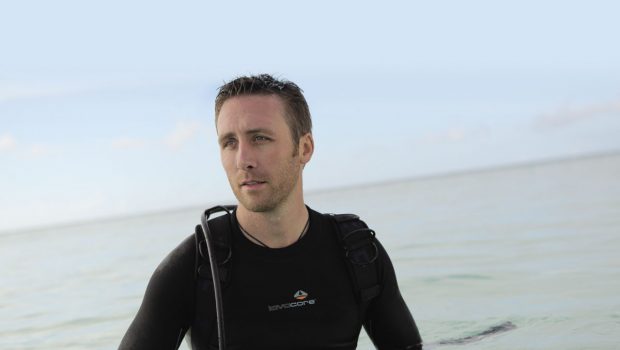 Philippe Cousteau on the POWER OF WONDER AND LEGACY

Philippe Cousteau Jr., the 39-year- old grandson of legendary under sea explorer Jacques Cousteau, is continuing a rich family legacy of sharing the wonders of the natural world with a  global audience. A diver, conservationist and environmental activist, the younger Cousteau has also become an inspirational speaker, writer, social entrepreneur and producer of myriad television and film projects.

Now in his fifth season of hosting the Emmy-nominated series Xploration Awesome Planet, which airs on a number of outlets, Cousteau and his wife, Ashlan, also co-host the popular Travel Channel series Caribbean Pirate Treasure, a waterborne odyssey that explores pirate legends, shipwrecks and the lore of lost treasures.

His previous work has examined the fragile future of sharks, tigers, rhinos and other species nearing collapse, and their critical places in the natural order. Like his grandfather and father before him—Philippe Sr. died in a plane crash six months before his son was born—Cousteau has embraced the mission of inspiring youth to take action for a sustainable planet, launching EarthEcho International in 2005 and authoring several children’s books.

How did your grandfather inspire you?

He was a captain in the French Navy during World War II when he and an engineer invented scuba diving. It revolutionized humanity in many ways because until then, we were limited in our ability to explore the ocean. He then went on to help create underwater cameras and lights and the means to do storytelling about this wonderful world that he was exploring. It was the first time for millions of people around the world to get a glimpse of what lived in the ocean.

Ted Turner called him the “father of the environmental movement” because over time, his stories led him to a deeper understanding of the changes that were happening in the oceans and inspired him to embark on a journey not just of exploration, but of conservation. Growing up with that legacy, I was very much inspired by his work. My father was also a big part of the early Cousteau Society, and was a major driver in the early days of the conservation ethic.

How did covering the 2010 BP oil disaster for news organizations and being among the first to dive into the historic spill shape your world view?

It was a transformative experience for me, and for the country. It was a much-needed reminder of the consequences of our addiction to oil. Seeing the spill firsthand was a horrific experience. While I was already engaged and committed to conservation, it really helped [me] to double down on the urgency that I feel on these issues, because I saw not only what it did to the environment, but what it did to the communities that rely on the environment—the fishermen, the tourism operators, other people. They were all shattered and devastated by that spill. It was a powerful reminder that when we talk about conservation, we are really talking about building a world where humans can thrive as much as nature.

What are your goals in reaching out to the next generation?

Xploration Awesome Planet is targeted to the teen and tween audience, and we also have a lot of adults that watch it. It’s a great example of a program that’s all about inspiring people to not just be a passive observer of the world around them, but to be an active participant, to get engaged.

How can parents build upon the foundational message of environmental responsibility that your work instills in kids?

They can treat their kids like the hearts and minds of these issues and recognize that they are more than vessels to be filled with information. We try to encourage them to be treated like they are agents of change, that they are creative, and give them the latitude, trust and empowerment to come up with their own ideas, to look at the world, be informed and inspired, so they can say, “Oh wow. This is an issue I really care about, and I am going to do something about it.”

Randy Kambic, of Estero, Florida, is a freelance writer and editor